This recipe was adapted from a biscuit recipe of my Grandma Gillen’s.  When I was young, she lived about three hours away, so we were always excited to visit her when we could.  In the summers we would get to spend a week or two with her, and she would take us swimming and she would always have ice cream in the freezer for us after.  I remember running across the hot pavement back to her house and following the white painted lines because I didn’t have shoes on, and that was the cooler footpath.

Grandma was the only I knew that had double ovens except for on the “Frugal Gourmet”, which we would sometimes watch at her house.  So those ovens, in my mind qualified her as a gourmet chef and she certainly never proved me wrong.

Two more things that have never proved me wrong is cheesy bacon.  So without further adieu, here is the recipe! 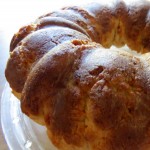 This recipe is best served and eaten immediately out of oven, well, as soon as your fingers can handle it!